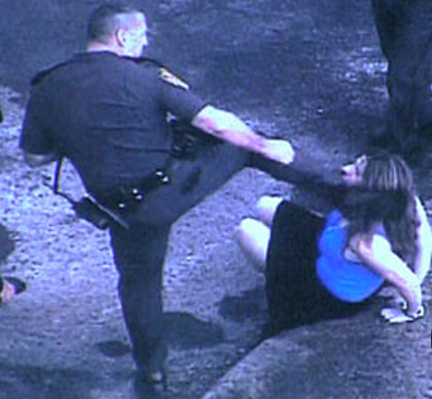 A June Gallup poll found that white Americans are 60% confident in police. Non-whites checked in at 48%. But in recent years, public trust in police has slid. A 2009 poll found that 63 percent of respondents of all races said police had “very high honesty and ethical standards,” but that number dropped to 57 percent the following year.

Many Americans have people employed as cops in their families, and use that fact to rationalize “the good” of the entire profession. Some are simply too afraid to say anything about obvious violent, thuggish behavior of cops, while others desperately want to hold onto what little Pollyanna Americana is left in their hearts. The facts speak for themselves as far as why Americans need to be proactive in protecting themselves against the largest and most heavily armed gang in the USA. Here are three of those facts.

A good number of white Americans reject affirmative action legislation because they say it unfairly gives less qualified “minorities” jobs they don’t deserve. Police departments, on the other hand, actually prefer and covet the least qualified applicants they can possibly get.

Mr. Robert Jordan of New London, Conn. wanted to become a cop. The first step in that jurisdiction is for applicants to take a Wonderlic test. Many Americans have heard of this exam because NFL prospects must take it as part of the draft process.

Jordan took the test on March 16, 1996 and scored a 33 (out of 50). He was not allowed to move on to the next stage of the application process because he scored too high on the test. The City of New London defended its policy, saying Jordan scored too far above the “normative median” of 21 and would “get bored” with the job and quit. The average NFL player also scores around 20 on the test, according to Bleacher Report.

Mr. Jordan filed a discrimination lawsuit in federal court alleging a violation of the Fourteenth Amendment’s Equal Protection Clause. The district court dismissed the case, ruling that New London’s policy is “rational.” The U.S. Second Circuit Court Of Appeals affirmed. In other words, it is legal for police departments to purposely hire the least intelligent individuals they can find. Plus the less education they’ve obtained, the easier they are to manipulate. This is why so many Americans are being viciously attacked.

A 2010 Michigan State University study found that cops with a two or four-year degree resorted to using force 56 percent of the time, while those with only a GED or high school diploma used force 68 percent of the time. The Bureau of Justice Statistics found in 2003 that 83 percent of U.S. police agencies require cops only to have a GED or high school diploma, and only one percent require a four-year college degree.

A September 2, 2010 article in Pacific Standard magazine suggested that requiring police to have college degrees may be discriminatory towards minorities. Oh the irony.

Operation-Nation has covered more than 600 instances of police killing, assaulting and/or raping an American since 2006. The offending cop was placed on “paid administrative leave” within a day or two of the incident more than 90 percent of the time.

Police across America know full well if they kill someone (on or off-duty), they will get an extended paid vacation, sometimes lasting years. They also know that it is extremely rare for cops to be held accountable in anyway for their actions.

Mr. Kelly Thomas was beaten to death ON TAPE by Fullerton, Calif. cops Manuel Ramos, Jay Cicinnelli, et al. as he begged for his life in July 2011. It was a small victory for Americans when the aforementioned two killers were actually charged with murder and other crimes. But reality set in at trial when the cops were acquitted.

A paid vacation, along with “atta boys” from fellow cops and Americans who love them, is only a dead human away. Even if they are fired from their current positions for killing or assaulting an American, another cop organization will hire them.

Former Bella Vista, Ark. cop Coleman Brackney, in a rare occurrence in U.S. jurisprudence, was actually convicted of negligent homicide when he murdered James Ahern in January 2010. After serving the insulting 30 day jail sentence, he was hired as police chief in Sulphur Springs, Ark. last March.

The incentives are too great to pass for cops, many of whom desire to kill already. Americans with common sense realize this.

Roommates Carolyn Warren and Joan Taliaferro called police when they heard intruders break into neighbor Miriam Douglas’ apartment and rape her on March 16, 1975. Dispatchers with Washington, D.C. police assured them help was on the way.

The two women, believing police would be there soon, yelled down to the apartment to try and stop the assault. But the two attackers heard them, forced their way into the women’s apartment and proceeded to assault and rape them for the next fourteen hours. Police never showed up.

The women filed a lawsuit – the oft-cited Warren vs. District of Columbia case – but were met with a harsh reality. The Federal DC Court of Appeals dismissed the case in 1981, ruling that cops have “no general duty to provide…police protection.”

The U.S. Supreme Court ruled on a similar case, Deshaney vs. Winnebago County, a few years later. That decision was nearly identical to the Warren case, with the majority ruling that there is no relationship between police and citizens that mandates protection. There’s also Town of Castle Rock vs. Gonzales. The Supreme Court ruled in that case that police had no duty to protect a woman and her three kids. The kids were murdered despite a restraining order against the killer. Thus it is well-established law that cops are not here to “protect and serve” despite that falsehood being displayed on many police badges, cars and station walls.

Americans who choose to ignore the facts are the ones who will be in the most danger. Sadly it has come to the point that we must stand our ground when we fear for our lives against these armed henchmen. Police protect and carry out the orders of government, corporations and individuals with large collections of Federal Reserve notes. Anybody who believes otherwise is naive, mentally disabled, and/or afraid to face reality.

There are far more of us than there are of them. But until we’re united on this front, expect more of the same for the foreseeable future.