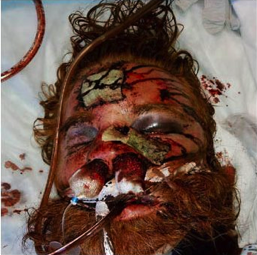 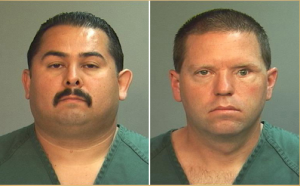 Mr. Kelly Thomas (L) after being beaten to death by Manuel Ramos and Jay Cicinelli (R).

The murder took place on Monday, July 5, 2011 around 8:37 p.m. in Fullerton. Mr. Kelly Thomas was a 37-year-old transient. Mr. Thomas was sitting outside near the Fullerton Transportation Center on East Santa Fe Avenue. Police say they went to the area after receiving a call about someone vandalizing cars. Cops Manuel Ramos and Joseph Wolfe arrived in separate patrol vehicles. Ramos knew Thomas from policing the area.

The next ten minutes were pure torture for the schizophrenic Mr. Thomas. He was beaten with clubs, choked, and tasered multiple times. Thomas went into a coma. He died about four days later. Thomas was essentially crushed to death by the weight of all the cops on top of him, according to the autopsy. A broken face, head trauma, and numerous other injuries were also cited as causes of death.

Fullerton cops Ramos and cop Jay Cicinelli were charged last September with manslaughter. Ramos was also charged with second-degree murder. Defense lawyers said they needed more time to review transcripts. They are angling for the charges to be dismissed.

Orange County District Attorney Tony Rackauckas called the murder “an act that was dangerous to human life and an act of reckless disregard for human life.” He continued, “citizens have a right to protect themselves from police.” Lawyers for Ramos and Cicinelli argued at the preliminary hearing that Mr. Kelly may have died from “an enlarged heart.”

WARNING: The following is the actual video of the murder. It is graphic and disturbing. If you get queasy or emotional about hearing people beaten to death in real time, don’t watch the video. But the tape speaks for itself. Kelly Thomas pleaded for his life. He screamed out for his father to help him while he was beaten, crushed and tortured to death by feral Fullerton pigs.

Six total cops were involved in the murder. But only Ramos and Cicinelli were charged. The video clearly shows Wolfe striking Mr. Thomas with a baton. He was not charged. The other three – Kenton Hampton, Kevin Craig and James Blatney – all were rewarded with paid vacations. They are still enjoying said vacations as we speak.

Mr. Ron Thomas, Kelly’s father, is working tirelessly to get the other cops indicted, especially Wolfe. Ron Thomas, who is a former Orange County Sheriff’s Deputy, called the killers “a gang.” He said he’s ashamed to have ever been involved in law enforcement.

The Thomas family got a small victory this morning. Ramos and Wolfe were fired this morning, according to Friends for Fullerton’s Future. They were terminated for refusal to talk to investigators. Cicinelli was also fired.

A police-friendly plea bargain is fully expected in the end. For what it’s worth, Ramos faces up to 15 years in prison if convicted. Cicinelli faces a maximum of four years.