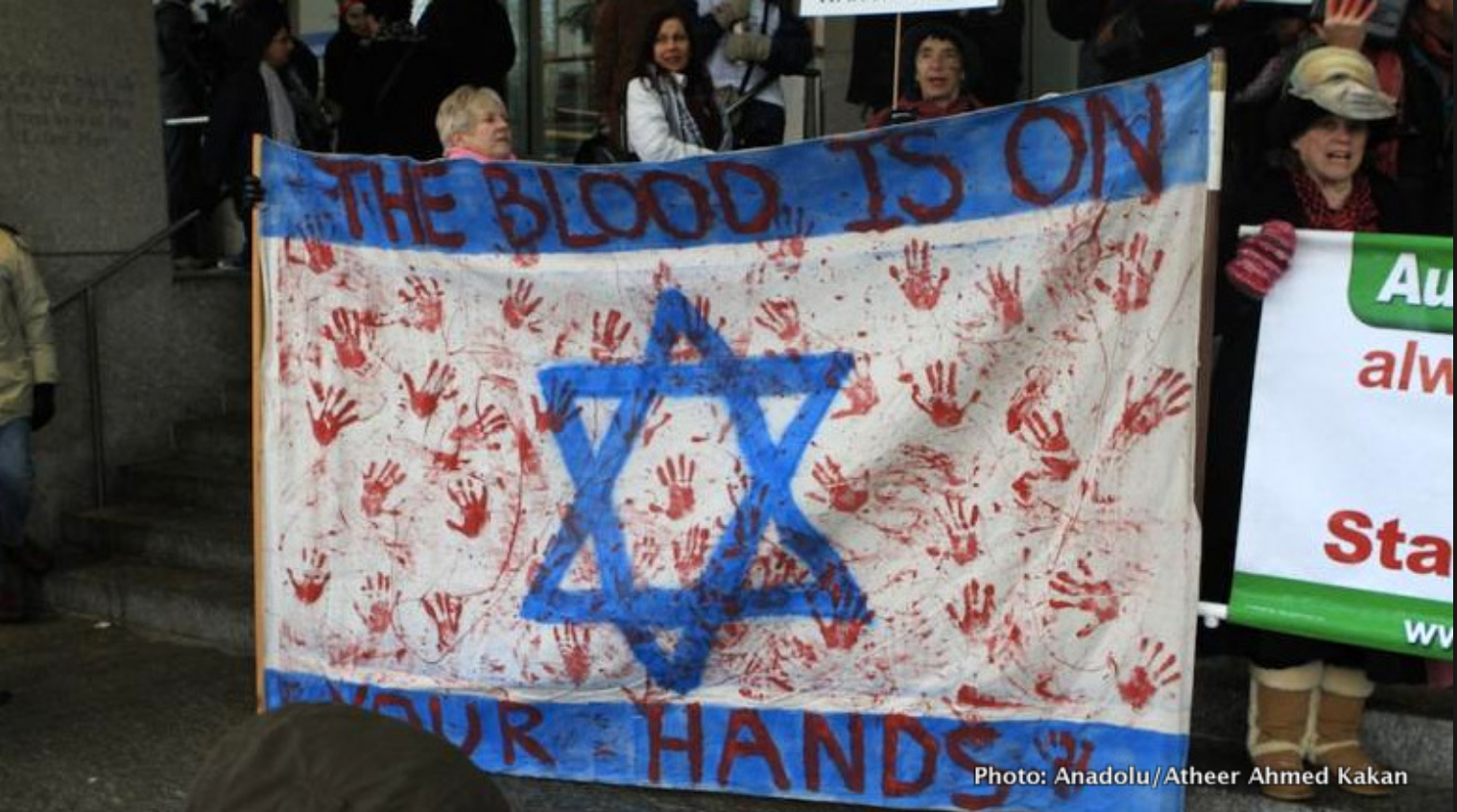 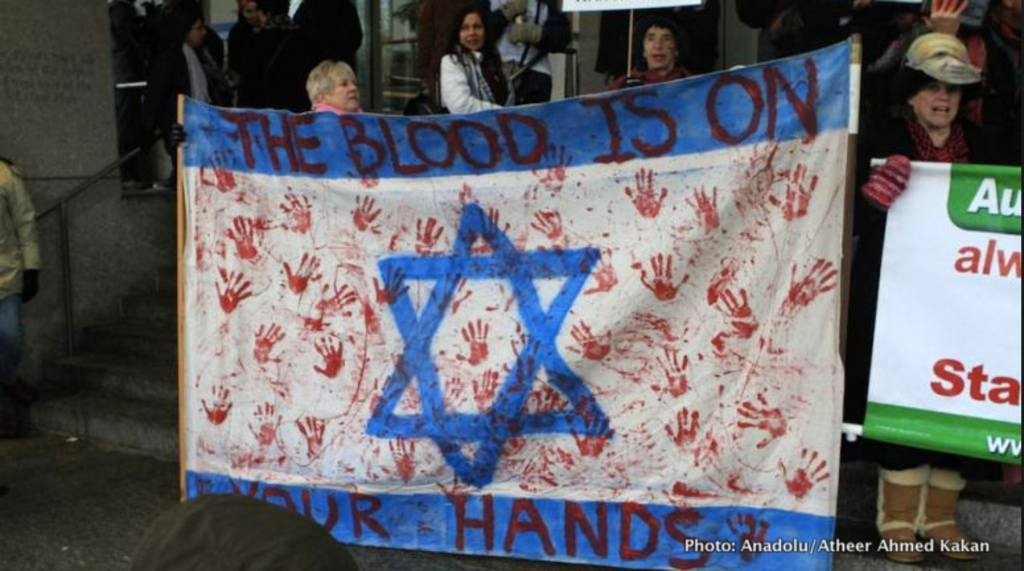 It was Sunday, March 16, 2003 when 23-year-old Rachel Corrie – an American college student at Evergreen State University – traveled to Palestine to protest the imperial apartheid regime of Zionist Israel. She was part of the International Solidarity Movement that aimed to bring more attention to the genocidal Israel regime that the U.S. government and most of the white U.S. population view as some kind of divine deity.

Ms. Corrie was yelling in her megaphone and wearing a bright orange fluorescent vest when she was acting as a human shield to prevent Israel imperialists from destroying homes of Palestinians. An Israeli soldier driving a bulldozer did as he was trained, and ran over the very brave, beautiful Ms. Corrie who stood her ground. The Israeli creature then backed the bulldozer over Ms. Corrie’s body again to ensure she was crushed and dead.

The identity of the murderer has been carefully protected by the Zionist regime. But he was rewarded with a paid vacation for killing Ms. Corrie and is now beloved by a vast majority of Israel people. Zionist media have gone out of their way to make Ms. Corrie out to be a criminal, and the killer out to be a hero.

Ms. Corrie’s parents sued the Israeli government in a Haifa court. The murderer was further protected by government, as he testified via closed-circuit television, with the screen hidden from view of the Corrie’s and the gallery. He didn’t even know Ms. Corrie’s name: “I think it’s Carrie,” he said. He used the ‘ol “I didn’t see her” bit to justify crushing Rachel with a bulldozer.

Of course the killer was never charged with any crimes and the Israel Supreme Court ruled that the military was not liable for Rachel’s death. U.S. government pretended like the incident never happened and continues sending Israel about $4 billion per year in welfare, courtesy of U.S. taxpayers. Regular OP-NAT EYE readers are probably thinking “this all sounds very familiar” except it took place in Israel.

Zionist military thugs get erections as they gun down unarmed, brown-looking Palestinian protestors, while the general Israel public worships them like gods.

RELATED: USS Liberty: When Israel Murdered 34 Americans and U.S. Government Covered It Up

It should all sound familiar because a large number of U.S. police academies have been flying cadets and senior officers to Israel to train alongside the Israel military since the early 1990s. That is part of the reason why U.S. cops act like robotic thugs with three consistent goals: blood, paid vacations, and accolades from copsuckers.

Hundreds of U.S. police departments – mostly concentrated in Arizona, California, Connecticut, Georgia, Massachusetts, New York, North Carolina, Washington, and Washington D.C. – have sent both new recruits and veteran cops to Israel to train with its military, according to Amnesty International. Hundreds more U.S. police departments invite Zionist generals and police chiefs to their cities to train cops on how to become zombie-like killers and how to deceive the public when covering up police state murder.

The Baltimore Police Department receives all of its training on crowd control, surveillance, and use of force from Israel national police and military. Of course Baltimore cops are known for the heinous murder of Mr. Freddie Gray on April 12, 2015. Baltimore police thugs shackled Mr. Gray’s hands and feet, placed him in the back of a police van, then drove around like bats-out-of hell, making abrupt stops and changes of direction knowing Gray was back there being tortured to death.

The medical examiner ruled that Gray died from “high-energy injuries” to his neck and spinal cord. He was crushed to death by the metal walls of the van as he made multiple impacts without being able to protect himself because his hands and feet were shackled. The U.S. Justice Department also concluded that there is a pattern of police thuggery against black people in Baltimore (of course that was before Confederate inbred Jeff Sessions took over the Department).

The Zionist Talmud says, “We may use subterfuges to circumvent a goy” in Baba Kamma 113a. This principle is integral to the U.S. police state and of course apartheid Israel. The Baltimore Attorney General was forced to drop 43 pending criminal cases in 2017 when it was discovered that Baltimore Police edited body-cam video to justify their lies and thuggish behavior. Albuquerque Police have also been caught doctoring body and dash cam video when they’ve murdered Americans.

Cops are not intelligent, and they rely on the copsucking community and government to defend all their actions. Any amateur videographer can clearly see the video involving the arrest of Sandra Bland by the Texas Department of “Public Safety” is edited.

They also clearly doctored the jail video when Ms. Bland was actually murdered by the feral white thugs. Of course the whole story these creatures put forth is bullshit. But again, they rely on their white copsucking fans to pass this crap off as truth.

Data security firm Nuix determined that 80% of police body cams can easily be hacked, and the footage downloaded, edited, and re-uploaded without anyone being able to notice if the editing is done well. Thus footage captured by cops is no more reliable than the word of the cops themselves, which means its not reliable at all.

Zionist military and police are monsters at best and serial killers at worst. U.S. cities are starting to take action against local police partnering with them. The Durham, North Carolina City Council voted unanimously last April to outlaw “military-style training” for its police department with Israel. Demilitarize from Durham2Palestine, a North Carolina activist group, played a pivotal role in forcing the city’s hand.

Vermonters for Justice in Palestine and several other activist groups mounted a similar campaign last year when Vermont State Police (“VSP”) planned a trip to Israel for a “counter-terrorism” seminar. The groups wrote letters to VSP leadership urging them to cancel the trip that was offered up to them by the Zionist Anti-Defamation League (“ADL”). The Commissioner of Public Safety, Thomas D. Anderson, said he weighed the pros and cons of the trip and decided it was in the best interest of the state to withdrawal this past November despite loud pouting from the ADL.

Northamption, Massachusetts police faced similar backlash from several activists groups, including the Jewish Voice for Peace, when it received an invitation from the ADL to travel to Israel for training with its military. Mayor David Narkewicz and police chief Jody Kasper said the trip was cancelled last month after activists learned about it through a public records request. The ADL again whined about it and used lots of Zionist-speak trying to defend the practice of U.S. cops training with Israel military.

U.S. cops training with Israel military only part of the problem

All you have to do is read more Talmudic texts to understand the mentality of Zionists and their military. “The goyim are not humans. They are beasts,” says Baba Mezia 114b. “Even the best of the goyim should all be killed,” says Soferim 15. It goes on and on, and just places a spotlight on the obvious reality of Zionists and cops in general.

The first god of white Americans will always be Israel. Their second gods are cops and military. The latter are the offspring of the previous. Once again, we urge all black Americans to arm themselves and be prepared to shoot first; or become a statistic at the hands of feral pigs in cop costumes, trained by Israel military.

Whenever we post about Zionist Israel, the “antisemitic” garbage is soon to follow. So we always post the words of 30-year Israel Knesset member Shulamit Aloni, re: “antisemitism.”

Also, God Bless the great Helen Thomas. She is one of the most iconic and decorated journalists ever, and a very brave woman for telling truth about Israel, despite Zionist bootlickers like Joy Behar repeatedly playing the Jew Card.