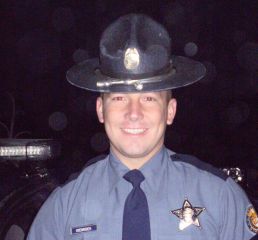 An Oregon State cop shot and killed a man last night around 7 p.m.; and at noon today, police were still saying they “don’t know what happened.”

One witness told KATU Channel 2 in Portland (see below) they saw the cop car pursuing another car down U.S. Highway 30 between the small towns of St. Helens and Scappoose. The cop car rammed the rear bumper of the other car, forcing it to crash into a ditch. Another witness then said the driver, who is now being identified as 27-year-old Josiah Fischer, exited the car and put “an arm” up.

The cop then fired at least four shots, killing Mr. Fischer instantly. A third witness said she heard the cop yell something to the effect of “put the gun down” after Fischer was already dead. U.S. police often yell “put the gun down” when they know witnesses are present, so the “feared for our lives” story can be utilized to justify the execution. Here is a report from KATU Channel 2.

KGW Channel 8 in Portland said the cops “recovered a gun they believe” belonged to Mr. Fischer. This is also standard U.S. police protocol when preparing their tale for the public; make the victim look violent. The police also originally told local media the person they killed was a female.

Though every eyewitness speaks of only one cop shooting and killing Mr. Fischer, the Columbia County Sheriff’s Office, the entity “investigating” the execution, told KATU two cops were involved: Justin Oxenrider and Robin May.

Local media are expected to launch their inevitable attacks on the character of Mr. Fischer as soon as possible, to help justify the murder in the eyes of American cop-suckers.

We will update as more information comes in.