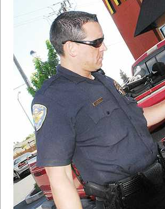 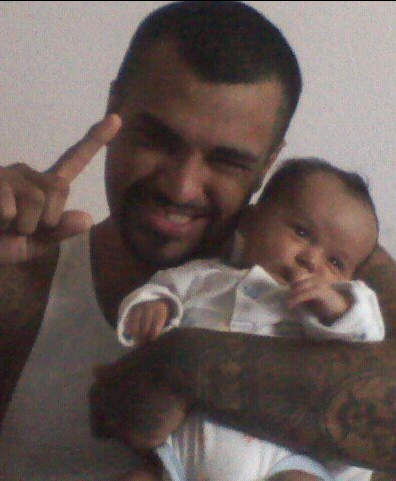 A Manteca, California cop brutally murdered a man two years ago, and now a man who voiced opposition to these U.S. government summary executions must go to court.

It was June 8, 2011 when Mr. Ernest Duenez, Jr. pulled into his driveway just before 7pm. The father of a baby boy was being stalked and followed by an armed, predatory municipal employee (“police”) named John Moody, who was obviously thirsty for blood and a paid vacation. He ultimately received both after Mr. Duenez, who was 35 at the time, exited his vehicle only to be shot 11 times by Moody right in front of his wife.

The cop yelled the proverbial “drop the knife” (Duenez was unarmed) and Manteca Police subsequently issued myriad “statements” in the following months about the murder. State-run media also followed protocol, publishing several stories referring to Mr. Duenez as “parolee” and “felon.” The murder, of course, was “ruled justified” by local government. The dash cam video was obtained by the family months later, and shows 10 seconds of radical terrorism right here on American soil.

The family of Mr. Duenez has since organized several protests and started a Facebook page which now has over 6,000 followers. In one of the most bizarre developments this website has ever covered in a story about murder under color of state law, the killer Moody and his cohort, Ar­men Avakian, were granted restraining order against family members of Mr. Duenez. The municipal employees claimed the family was “violating their personal space” by shouting outside the police department, according to The Record, a local state-run media outlet.

Moody claimed he was “scared” when Mr. Dominic Aguilar, of Roseville, exercised his First Amendment rights on the Facebook page, saying he would defend himself by any means necessary against the murderous municipal employee if they ever crossed paths. Though the U.S. Supreme Court ruled in the 1969 case of Brandenburg vs. Ohio that “the government cannot constitutionally punish abstract advocacy of force or law violation,” Mr. Aguilar was charged anyway with “making terrorist threats” last year by the San Joaquin County prosecutor’s office.

He was initially held hostage by the state, which demanded a $150,000 ransom (known as “bond” or “bail”). The ransom was ultimately rescinded by the government. The aforementioned Brandenburg case overturned the conviction of a man who was a member of the U.S. terrorist group known as “Ku Klux Klan,” who publicly declared he would “take vengeance against niggers.”

Mr. Aguilar’s attorney Tai Bogan correctly argued in court this past Wednesday that his client’s speech is protected and that one of the “offending” posts was a lyric by the late rapper Cougnut. The Facebook posts were also not sent directly to the murderer, thus can only be construed as First Amendment-protected speech. Avakin and a few other cops took the stand and said Moody “almost cried” when he read the Facebook posts. The guy wearing the judge costume, Ronald Northup, “ruled” that the prosecutor presented enough evidence to proceed to trial on May 22. Northup said a “reasonable” cop could be fearful because of the “threats.”

This case proves several things that are already self-evident and common in the United States until Americans commence Revolutionary War II.

1) “The state” will protect their armed municipal employees whose primary jobs are to slaughter and incarcerate Americans;

2) there are no such things as “Constitutional rights” in this country–if there were, Mr. Aguilar would not be enduring this charade;

3) Even if these mythical “rights” did exist, they only protect Euro-Americans who possess an abundance of Federal Reserve notes or those who slaughter/terrorize non-Europeans (see Brandenburg above);

4) Murderers who work for “the state” will be inexplicably praised and honored by the poor and middle-class Euro-American public, while the same people hate murderers who don’t wear cop costumes (Jodi Arias, Casey Anthony, OJ Simpson et al.);

5) Mr. Aguilar has to interrupt his life to endure one of these plays directed by government that could ultimately land him in a U.S. concentration camp for years.

We will keep the Duenez family in our thoughts; and will keep you updated on Mr. Aguilar.