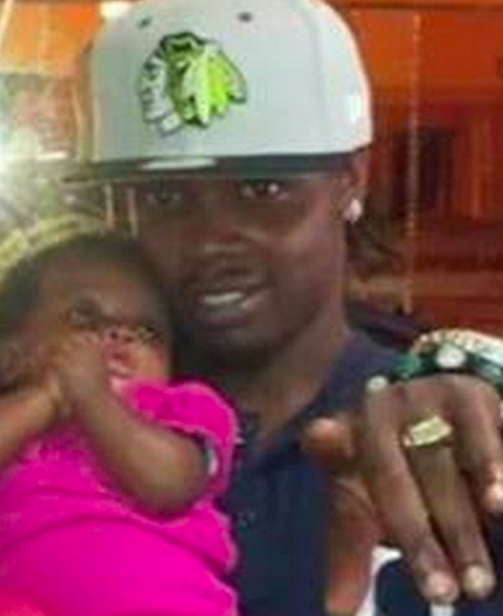 NEW YORK — Though it appears to be a municipal case of “throw the doggie a bone,” an NYPD cop has been charged in connection with the murder of Mr. Akai Gurley. Peter Liang, the cop state-run media repeatedly referred to as “rookie,” recklessly fired a gun while in full cop costume, into a pitch dark stairwell on November 24. Mr. Gurley was struck in the chest and died within an hour. Melissa Butler, his girlfriend who was with him at the time, was not hit. Mr. Gurley’s death was ruled a homicide by the city’s medical examiner’s office.

NYPD Commissioner Bill Bratton, in desperate need of some type of sacrificial scapegoat to distract from his organization’s domestic terrorism activities, immediately threw Liang under the bus. Patrick Lynch, the top mouth for the NYPD cop union, played the fearmongering card for the pro-police state community. He said Liang was patrolling “one of the most dangerous housing projects in New York City,” and stopped just short of calling Mr. Gurley collateral damage.

Liang was indicted by a grand jury on several charges, with the two most serious being second-degree assault and second-degree manslaughter. This may seem like a small victory for the people on the surface. But the whole arrest and prosecution will ultimately be a puppet show to give the appearance of cop accountability.

No Sharpton, No Amnesty?

MSNBC talk show host Al Sharpton told the New York Daily News that he and the Gurley family are “pleased” with the indictment. But Sharpton has never been the family’s official spokesperson. Hertenceia Peterson, Mr. Gurley’s aunt, told a Time Warner media property in December that Sharpton was only showing up for “political and monetary gain.” The New York Post reported that Sylvia Palmer, Mr. Gurley’s mom, received no help from Sharpton’s National Action Network to travel from Florida to New York for her son’s funeral.

The mere mention of Sharpton, for whatever reason, causes stroke-level anger and anxiety among right-wing groups. But young black activists have been clashing with the Reverend frequently in recent months. Members of Mr. Gurley’s family called Sharpton’s organization “a circus,” while the founder of New Yorkers Against Bratton called Sharpton “destructive at worst, irrelevant at best.” Sharpton responded by insinuating he is the father of the movement and told Capital New York that 21st century activists are “pimping” young black Americans.

Killer cop indictments are rare. The fact this one happened with the victim’s family openly opposed to Sharpton’s presence might be a sign of things to come.

The big tan elephant in the room is of course Liang, especially when other NYPD cops have gotten away with far more vile murders. There’s video of white NYPD cop Daniel Pantaleo strangling Mr. Eric Garner to death as he pleaded for his life. No charges were filed. Richard Haste, the white cop that murdered Mr. Ramarley Graham three years ago this month, had had at least two indictments dismissed against him.

Lawyers recently secured a settlement from New York City on behalf of Mr. Graham’s family, totaling nearly four million Federal Reserve Notes. The family is expected to receive half of that total at best after attorney fees. Mr. Graham, however, is still dead and the killer is still free.

It should surprise no one that Liang is being scapegoated. Asian cops appear to be the most expendable by NYPD. One of the two cops Ismaaiyl Brinsley killed in December were Asian; the other Latino. Of course that entire ordeal appears to be a government false flag operation. The more spontaneous-feeling shooting of two NYPD cops in the Bronx in early January involved a white cop.

NYPD stands to benefit very little by using a black scapegoat. First, black cops are rarely involved in shootings that result in deaths. Second, white NYPD cops will simply kill black cops themselves and pretend like they are “black suspects” to justify the murder. Reuters interviewed 25 black NYPD cops last month and revealed that most of them fear for their lives when off-duty due to the culture of racial genocide embraced by NYPD.

Its also fairly common knowledge that black cops are not afforded the same protections as their white counterparts. White cops are in charge of the good ‘ol boy clubs within cop organizations and are rarely sacrificed for these purposes. An Asian scapegoat makes perfect sense here.

Cop Will Get Slap On Wrist

This indictment needs to be taken with a grain of salt. Second degree manslaughter carries a sentencing range of 3 to 15 years in prison. Second degree assault has no minimum sentence. Keep in mind the purpose of this whole charade is to create a false sense of accountability that state-run media are sure to reinforce. Its doubtful this case ever reaches trial, and the cop will likely get off with some type of plea bargain.

The family of Mr. Gurley will ultimately receive paper blood money from the city, which will be viewed as “justice” by some. If the cop serves any time at all, it will be measured in months, not years.