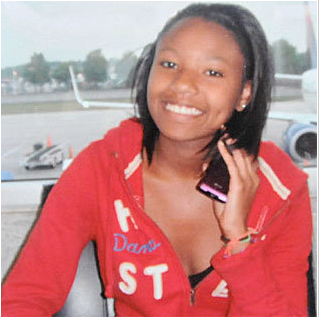 Ms. Jasmine Thar was 16-year-old when she was murdered.

CHADBOURN, NC — It has now been four months since a 16-year-old girl visiting her family over the Christmas holiday was gunned down in broad daylight.

The murder took place on December 23, 2011 in Chadbourn, North Carolina – a town of 2000 residents 150 miles southeast of Charlotte. Ms. Jasmine Thar, a 16-year-old sophomore at Ardrey Kell High School in Charlotte, was visiting her godmother Treka McMillian and her friend Jah-mesha McMillian in the small town. Jasmine’s mother, Carletta McNeil, was already in the SUV waiting for Jasmine and the McMillians to get in so they could all go Christmas shopping. Suddenly, a single shot from a Remington 700 rifle came from a neighbor’s bedroom window, striking both the McMillians and fatally striking Jasmine in the chest. Jasmine’s 15-year-old brother, Jay, applied pressure to the bullet-wound to her chest, begging his sister “don’t leave me.”

The killer, 23-year-old James Anthony Blackwell, said the gun “fired accidentally” when he removed it from a case. Blackwell was handcuffed by Chadbourn cop Scott Rockwell and taken to the police station, but only to allow Blackwell to “calm down away from the scene.” No charges were filed because the cop wrote in his “report” that the killing was an accident. Police found a Confederate flag and Nazi memorabilia and books in the shooter’s bedroom. Jah-mesha McMillan was also shot in the chest, but ultimately survived. The FBI’s Civil Rights Division is now looking into the shooting. Blackwell has since disappeared from the neighborhood.

Ms. McNeil has turned to a local civil rights activist to help bring attention to the murder of her daughter since no charges have been filed four months later. Watch a report from WSOC Channel 9 Eyewitness News in Charlotte.

Most forums following this story are filled with Americans of European descent claiming “blacks” are “playing the race card,” that the shooting was an accident and that nothing criminal occurred. But it is becoming abundantly clear that in today’s USA, all one must do to shoot and kill “black” kids (see also Trayvon Martin) and not be arrested is either claim self-defense from a “suspicious person” or claim that a magic bullet from a magic gun accidentally aimed itself right where three people were standing, shot by itself and hit them all.

The family of Jasmine and the McMillians will meet with the Columbus County District Attorney this Thursday for an update on the case. Our thoughts are with the families of the victims.

PLEASE SIGN THE PETITION “JUSTICE FOR JASMINE” AT THE LINK PROVIDED (link is defunct).