President Barack Obama spoke extensively about gun violence and murder thereof during his State of the Union Address, but did not mention anything about police arbitrarily executing Americans simply because they feel like it.

It was 1:25 a.m. Monday morning when Billings cop Grant Morrison and one of his cohorts were looking for someone who “ran from police,” according to municipal employees in charge of the department. Mr. Jason Shaw, 32, was by all accounts minding his own business with friends, about to embark on a late-night trip to a local casino.

Municipal employee Morrison approach a car which Mr. Shaw, a male friend, and two female companions were sitting in near a home at 23 Custer Avenue. The home belongs to Mr. Harry Calvin, the father of two of the individuals Mr. Shaw was with. Mr. Shaw got out of the car and “was not compliant” with the cop, according to his boss, Captain R.D. Harper.

Municipal employee Morrison proceeded to electrocute Mr. Shaw with his 50,000 volt torture toy. Billings employees then say the electrocution was ineffective, so Morrison proceeded to pull a firearm and shoot Mr. Shaw, killing him instantly. Employee Morrison said Mr. Shaw pulled a BB gun on him, which he said looked real and thus “feared for [his] life.” The cop was rewarded for the murder with a paid vacation, aka “paid administrative leave.”

State-run media quickly seized upon an opportunity to dig up a “criminal record” of Mr. Shaw, which in their eyes, along with their fans and followers, justifies the murder. Mr. Calvin, according to Montananews.tv, said the cop who killed Mr. Shaw should be charged with murder. “What is wrong with this picture? The Billings Police sure have been killing a lot of people lately. What’s going on here?” he said. Mr. Shaw is the third murder victim at the hands of Billings Police in the past 11 months, and the second of 2013.

Mr. Shaw went to Santa Fe Community College, was a staunch advocate of medicinal cannabis, and enjoyed reading Elmore Leonard books. His son, whom he referred to as his “beautiful baby blue eyed boy,” will now grow up without a father. 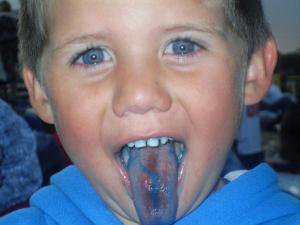 Our thoughts are with the Shaw family.