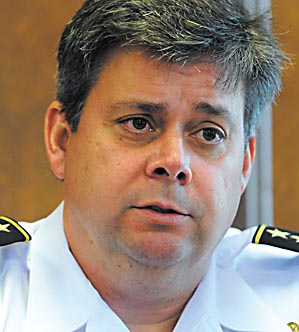 Doesn’t get much more bizarre than watching feral pig
Ronal Serpas speak like this when his “hoodie” never fully
hid his face from the very beginning.

Serpas told WDSU Channel 6 that his cops responded to a “shoplifting call” at a convenience store in Northwest New Orleans on Belfast Street. A younger kid with a blue shirt allegedly stole a carton of juice. When cops showed up, they targeted the first person they saw wearing a blue shirt…31-year-old Mr. Atkinson, who was not the thief (and even if he were, theft is not a crime punishable by summary execution).

It appears Mr. Atkinson was carrying his pistol, which is his natural right despite European laws that attempt to disarm Nubians in America. Mr. Atkinson feared for his life when he saw the cops show up, and ran. One of the cops fired upwards of 20 times at Mr. Atkinson, killing him instantly. The U.S. Supreme Court ruled in the 1985 case of Tennessee vs. Garner that it is unlawful for cops to shoot at “fleeing suspects,” but that never slows U.S. police state savagery. The killer was rewarded with “paid administrative duty,” which means he earns money sitting around doing nothing for the foreseeable future because he murdered “a black.”

The list of New Orleans residents murdered by New Orleans police since Serpas became the leader in 2010 is chilling. Justin Sipp was gunned down by New Orleans police thug Jason Giroir on March 2, 2010. Mr. Sipp and his brother Earl were pulled over at 5:30 a.m. while driving to work in what Serpas termed a “pro-active stop” (aka cops randomly harassing “black” folks).

In this case, Justin was assaulted by the cops so he fired his pistol in self-defense. He hit two of the cops, but ultimately was martyred in a three-against-one scenario. Giroir is also the same New Orleans cop who peppered sprayed and punched Mrs. Jonie Pratt, the wife of a fellow New Orleans cop, in 2006.

One week after Mr. Sipp was killed and Mr. Earl Sipp wounded, 20-year-old Wendell Allen was gunned down in his own home because of a “search warrant for marijuana.” New Orleans residents can fill in all the other victims in the comments section below.

Louisiana: Prison Capital of The World

The United States boasts 25 percent of the entire planet Earth’s prison population, with Louisiana doing its best to increase that number. The state has 242 imprisoned citizens alone sentenced to life without parole, for committing non-violent, victimless “crimes,” according to an October 2013 report by several civil liberties organizations.

The total incarceration rate in the state – which has a 33 percent “black” population – is five times that of Iraq, 10 times more than China, and 20 times greater than Germany, according to Nola.com. Seventy-plus percent of Louisiana’s prison population is black.

Serpas, the police chief of the state’s largest city (with 60 percent of its residents being black), has been putting on an Antebellum-type display for his Confederate audience. A rough and conservative estimate of the number of “black” men murdered by New Orleans cops under his command easily exceeds 100. He simply looks and smells like a Simon Legree 2014, with a desire to out-kill other police departments locally and nationally.

Homer, Louisiana top cop Russell Mills once said he “wants blacks to be afraid” every time they see him or one of his henchmen. But Serpas, as he stated above, wants as many “black” men out of the prison camps as possible so he has more prey to target. When he is not murdering, he is doing Maricopa County-like “sweeps” in “black” neighborhoods, like Arizona does to Latinos.

Nubians Must Stand Their Ground

Any “black” man with common sense would fear for his life when encountered by Serpas or his mercenaries. Many residents have stated they do not want New Orleans police in their neighborhoods, but occupying armies do not listen to their prey. These cops will kill you and be rewarded with paid vacations and informal accolades from their counterparts and city government officials.

So-called blacks are conditioned and trained via 500 years of imperial manipulation, to hunt and kill other black people ONLY…and run from white cops.

Nubian men must realize a young death is imminent – whether via incarceration, police state execution, or poop-butt negro imitating Hollywood/hip-hop. If New Orleans brothers want to shoot people, why are you shooting your own people who are victims of the same imperial enemy?

All of you will ultimately end up in THEIR concentration camps regardless, so there’s no point. Use your life to set an example for your sons and neighborhood young men against these government-sanction terrorists. Lovelle Mixon, Maurice Clemmons and Omar Thornton are some of the contemporaries who can now be mentioned in the same breath as legendary heroes like Nat Turner and Charles Deslonde. These gentlemen gave their lives to try and jumpstart the reconditioning process.

The police badge replaced the terrorist white-pointy-hat uniform in the mid-1800s. It will be difficult, but an awakening must happen for Nubians to ever be free. Our souls are released from the Planet Hell even if their bullets hit us. But a life lost in battle is one that will inspire fathers, uncles, sons and brothers of Nubian families all across America to re-evaluate this existence.

We will continue to monitor Serpas’s terrorist activity.