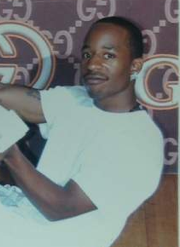 NORFOLK — A young man is dead after being tried, convicted and sentenced to death in a matter of seconds by Norfolk Police, for the alleged crime of trying to cash an invalid check.

It was 2:45 p.m. this past Monday, May 20, when Mr. Joshua “Omar” Johnson and his girlfriend, Virgie Hairston, pulled into a Wells Fargo drive-thru at 2000 Colonial Avenue in Norfolk. The teller told Johnson, 22, that there was something wrong with her computer and there will be a slight delay, according to Fox 43 TV. Ms. Hairston, who was sitting in the passenger seat, said Norfolk cop cars all of a sudden surrounded Mr. Johnson’s car. The cops immediately jumped out of the car with guns already in hand and shot 11 bullets through the front windshield of Mr. Johnson’s car, killing the young man instantly.

Of course the cops were immediately rewarded for the kill with paid vacations, aka “paid administrative leave.” The names of the killers are of course being protected by the Euro-imperial government.

Not only did standard state-run media and police protocol immediately commence after the young man was savagely slaughtered, but a Confederate touch was added to it. Norfolk cops say Mr. Johnson “hit them with his car” and that they are “trained to protect themselves.” Normally state-run media immediately publish stories about “prior criminal records” for murder victims at the hands of police, which in the minds of the cop-sucking community, justifies the murder. None of said media published anything about Mr. Johnson, thus none exist. Local media did, however, run a mugshot of Ms. Hairston. After witnessing her boyfriend summarily executed by Confederate cops, and lucky to be alive herself, she was charged in connection to this alleged “bad check.”

There has to come a point when the diaspora people collectively realize Earth is the Biblical hell we are all taught that we go to upon death if we do not live by the book of Euro-imperial law and culture. Mr. Johnson’s soul is now free from this existence, but his human form was taken in vain if Nubians do not re-adopt our principles from 200 years ago. Today our people are conditioned to believe that there is somehow “justice” in this country; fairness and righteousness in this country. The fact is every time you encounter one of these Euro-Americans wearing a cop costume, you have a very good chance of being killed. Our people 200 years ago, who couldn’t even speak English, realized this and took the appropriate action.

There have been a few contemporary brothers who have followed the true Nubian teachings of our brother Nat Turner, specifically Lovelle Mixon of Oakland and Omar Thornton of Manchester, Connecticut. Both of their souls are now free as well, and they both did their best to set an example, as far as showing us the only path to true freedom if we want to exist peacefully and independently on this planet.

If the people of Norfolk are expecting any adverse action against the murderers of Mr. Johnson, they are simply suffering from “we shall overcome” hangovers from the 1960s. I mean, the Daily Press in Newport News referred to Mr. Johnson as “Jackson” half the time in a story they wrote about the murder: 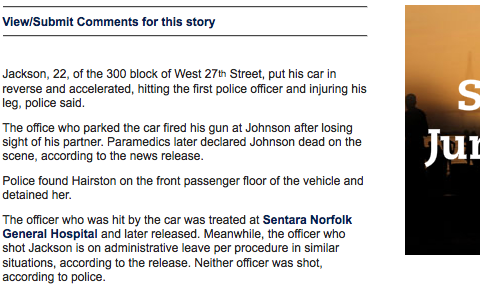 …and WAVY.com simply referred to Mr. Johnson as “dead driver” in their headline. 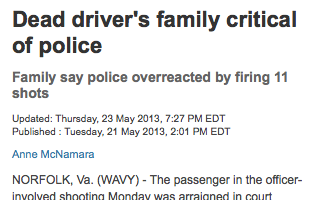 These people do not even consider “blacks” humans. But we continue to do them favors by killing each other, worshiping Obama and Euro-liberal ideals; and begging them for freedom and justice, as opposed to taking it like men. Until that happens, the OP-NAT EYE will likely cover at least 10 more stories similar to this one in the next few weeks.

We could not confirm one way or another at press time if Mr. Johnson had children. Our thoughts are with the Johnson and Hairston families.