UPDATED September 16, 2019: John Wertsching, aka “Uncle John” and @azmoderate on Twitter, is still trying to appeal to the copsucking community by using buzzwords like “probation violation” and “convicted felons.” 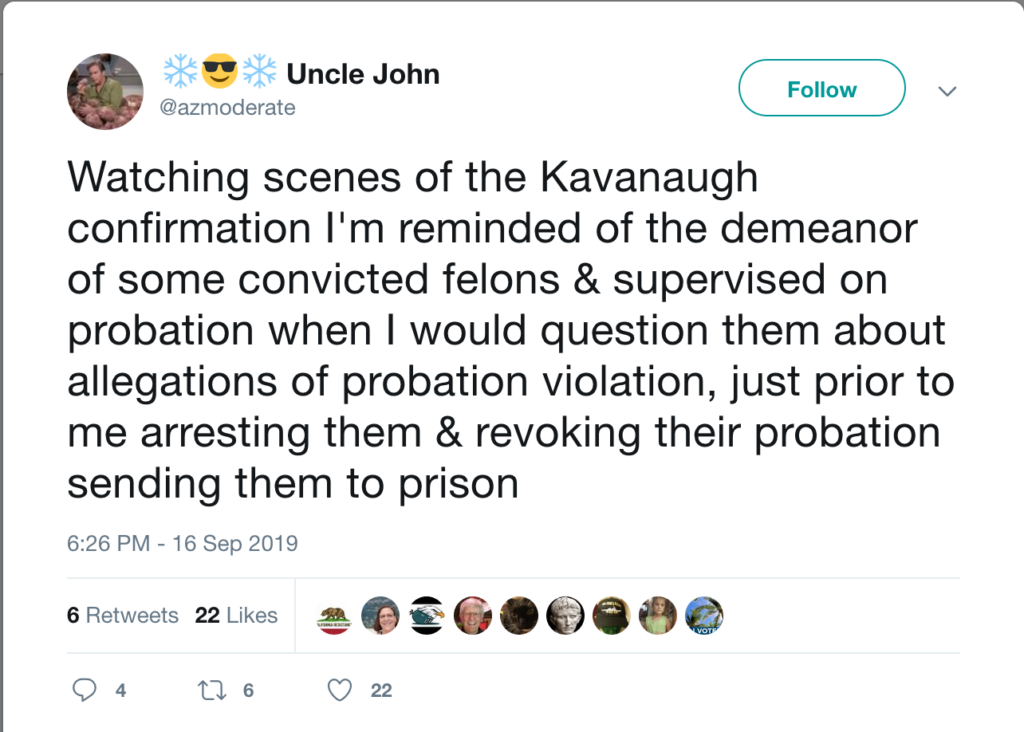 It is well-known that Wertsching supported and defended pedophile Bill Talley in 2013. FYI, we wrote about these new Kavanaugh NY Times allegations too.

Interestingly, this is Wertsching’s highest engagement tweet of 2019 despite having almost 21,000 followers. The low engagements ratio means suspect “followers.” You have to wonder if this guy ever works or does anything besides Twitter. He averages 32 tweets per day, and often has well over 50 tweets in a day, according to Social Blade.

Anyway it’s always fun looking back at all the tweets from April 19-21, 2013. Wertsching relied on the copsucking community extending their unconditional love to him. But it didn’t go 100% as planned for him. 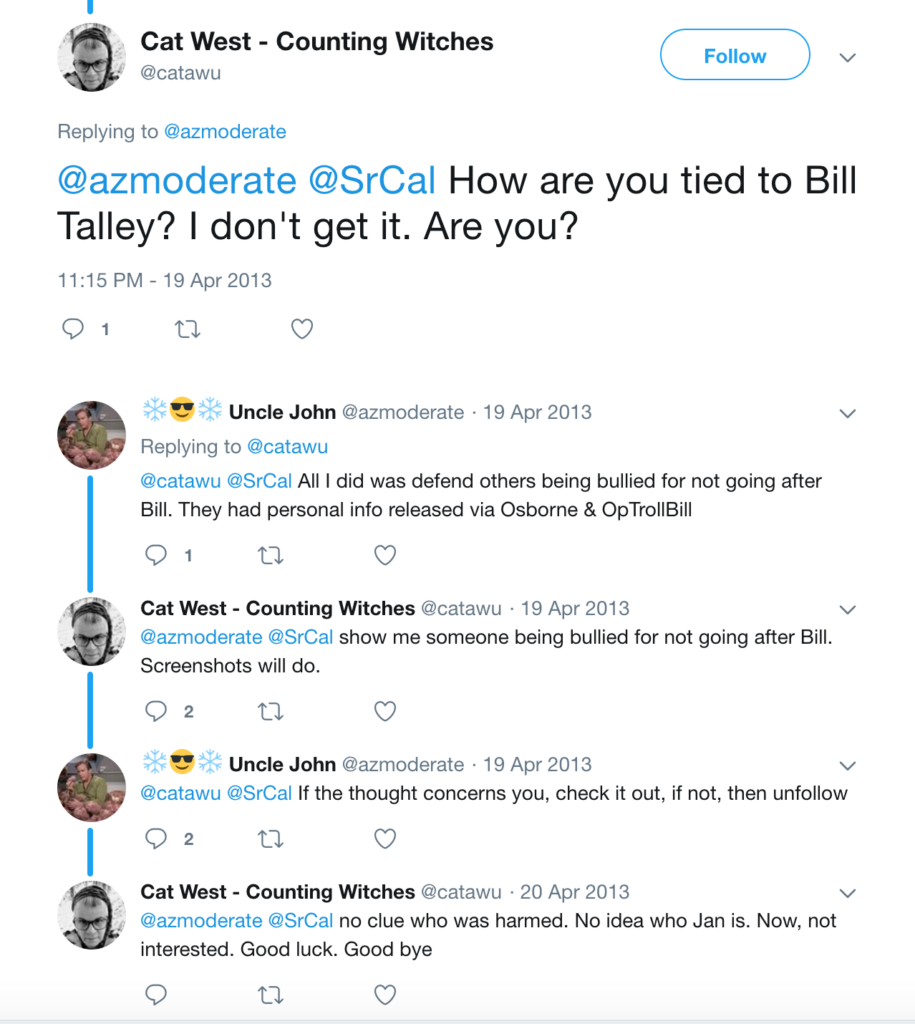 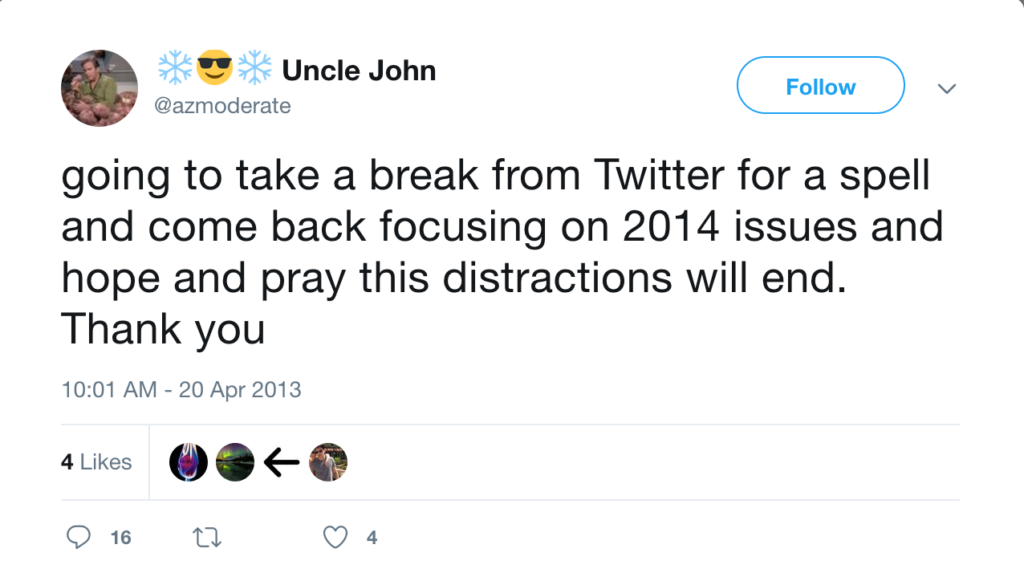 *UPDATED May 29, 2013: Convicted child pornography dealer William Talley was sentenced today to one year in prison and eight years probation by Davidson County (TN) judge Monte Watkins. He also must register as a sex offender. Talley is the man John Wertsching steadfastly defended on his blogs and on Twitter (see below), knowing Talley is a pedophile. The sentencing report and testimony by the district attorney are quite disturbing.

Matt Osborne attended the trial. He gave a play-by-play of the entire hearing. Nashville detective Chad Gish testified about the videos Talley had in his possession. “These videos were so reprehensible,” Gish said. “[One video contained] a three-year-old girl screaming while she was being raped.”

Talley argued that his Twitter account does good in the community so he should get a lighter sentence. This helped him get off relatively light.

Wertsching went to great lengths to protect Talley, including doxxing Trina Cuppett. The two worked together at one point. Wertsching “doxxed” Cuppett because she refused to support the pedophile Talley. Cuppett, who has children, received several disturbing, demented tweets from Talley and his pedo-army. He referenced Cuppett’s family in his creepy rants. That would not have been possible if Wertsching did not give Talley information about Cuppett’s family.

Wertsching’s name was immediately recognizable by Operation-Nation. He is the county employee who illegally seized a tape recording device from our Editor-in-Chief, Brian Wilkins, back in March 2009. Wertsching threatened to unilaterally send Brian “to prison” for recording all conversations between them. Arizona is a one-party notification state. Thus the recordings were legal. The conversations included Wertsching telling Wilkins “I own you” and “I make the laws for you.”

Read the “55 Days In Maricopa County Jail” blog series for more information on the aforementioned.

Wertsching was doxxed yesterday. This put his job in jeopardy. He had been anonymously bashing Maricopa County Sheriff Joe Arpaio on his blog azmoderate.com during the entire 2012 campaign season. Damage control was necessary at this point. Wertsching wrote a blog post on April 19 entitled, “Time To Let All Know The Truth.” He has since deleted the post. But the Google cache still has it. We also took screenshots. 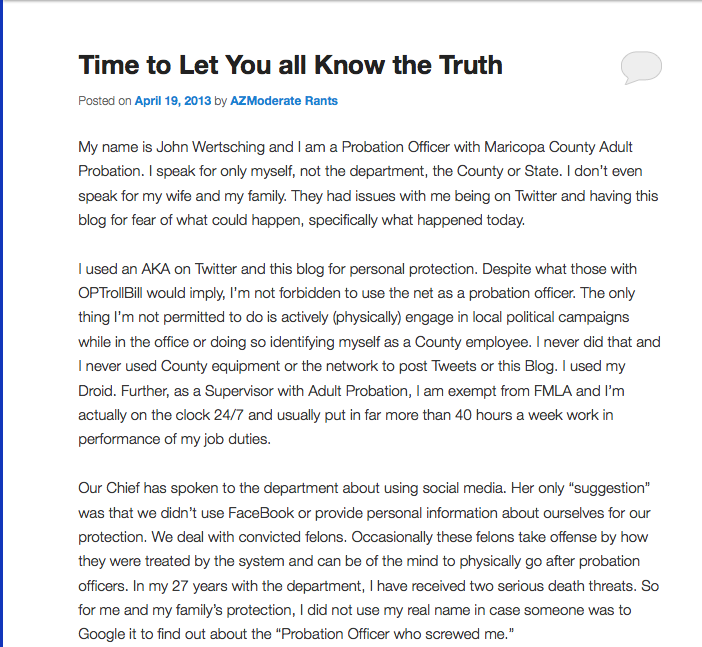 The rest of the blog post is available here via Archives.

Wertsching, seemingly trying to be pro-active knowing he’s using taxpayer time to get in Twitter fights and convey political ideologies, also removed this post about Arpaio. Ironically, Wertsching boasts on the blog about Arpaio having too big of an ego and, basically, being too stupid to learn his true identity. 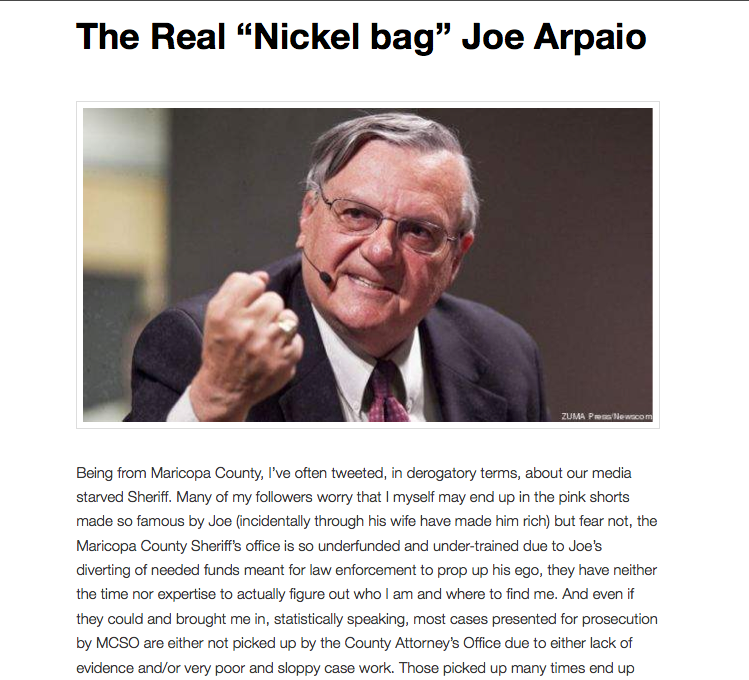 UPDATED 4/22/2013: Here are some Twitter posts from Wertsching and his associates. Some of it is Brian Wilkins bashing and cop-sucking. Most of it is more attacks on Joe Arpaio. Wertsching admits he is not allowed to talk about politics on social media as a condition of employment with Maricopa County.

Wertsching caught the attention of several anti-pedophile Twitter users for defending convicted child pornography dealer William Talley on his blog. The offending post is entitled “When Is Cyber-Bullying Useful.” It has since been thoroughly redacted and edited since Wertsching’s real identity was exposed. (NOTE: the post has since been removed by Wertsching. But here it is plus the comments via the Wayback Machine)

The kiddie-porner Talley was a former board member for liberal political group UniteBlue. He was charged and subsequently convicted of distribution of child pornography and cocaine in 2005. Talley will be sentenced for the crimes in late May. Wertsching claims to be born-again liberal. He was part of the “AZ GOP for 33 yrs” until “the tea party theft of the party drove me left,” according to his blog. Wertsching supports UniteBlue and supports Tally. This was clearly evident before his blog was edited. He believes that claiming to be “liberal” now places him above reproach.

The bottom line is that Wertsching is a scared, hypocritical child who hides behind a government position and a formerly anonymous blog to rant about people. He preaches justice and fairness in his “rants.” Yet he violates people’s Constitutional rights under color of state law, which he calls “bullying.” Wertsching refers to said individuals as “former defendants” and “felons” to gain the support of the copsucking community. He would never say anything to anyone face, because he’s nothing but a little boy without his little badge and title.

It doesn’t matter whether Wertsching is Republican or Democrat. He’s wasting the public’s tax dollars getting in Twitter fights. He also campaigns for candidates he likes on the clock. This guy has fooled his following. He poses as a fighter for justice when he’s just a cog in the machine. We expect no disciplinary action from Maricopa County because this is business as usual in this state.

Wertsching started a new Twitter account today under his real name @johnwertsching. The first three Tweets are links to three personal profiles of his on the Internet: Tumbler, VisualCV and Lookup Page. The new profile also has a link to a Viadeo profile and he even has a new WordPress blog.

These are obvious SEO moves by Wertsching, now that a simple Google or Bing search of his name brings up the truth about him. Wertsching believes all his new profiles/web presences will ultimately push the truth down in search results and move his stuff up. Unfortunately for a low life, desperate bitch like Wertsching, truth always prevails. We’ll continue updating as necessary.

Maricopa County Deputies Assault Woman, Lie Under Oath About It (6/1/2010)