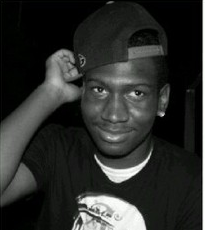 ATLANTA — Cobb County Police shot and killed a man they say was naked and armed with several weapons.

The execution happened last night around 7:40 p.m. at the Riverside House Apartments. The complex has an Atlanta zip code. According to Cobb County Police, they were responding to a 911 call reporting a “suspicious person.” Police say they “encountered a man who was nude and armed with two knives.” According to police, 18-year-old Tendai Nhekairo “tried to feloniously assault” one of the cops. This prompted the cop to shoot the young man, scheduled to graduate high school in a few weeks, killing him instantly. The cop involved was of course rewarded with a paid vacation, aka “paid administrative leave.”

Watch a report from WSB TV Channel 2 in Atlanta.

State-run Georgia media, following standard protocol, have reported a “prior arrest” of Mr. Nhekairo, which they use to justify summary executions for their blood-thirsty American audience. The state of Georgia says Mr. Nhekairo “broke the law” previously because he was in the possession of cannabis plants known to treat glaucoma, cancer, depression and many other human ailments. It is unclear how Mr. Nhekairo’s possession of cannabis in February is connected to him being summarily executed by Cobb County Police last night.

Mr. Nhekairo’s parents want to hear the 911 tape themselves, as they do not believe the story the people who killed their son are telling. Cobb County Police first said Mr. Nhekairo had “several weapons,” then changed their statement and specifically said knives. The incentive for police to kill in America is far too great. If what police say is true, diffusion of the situation could have easily been done non-lethally. But police know that weeks (and sometimes months) long paid vacations can easily be obtained simply by killing Americans and taking a little grief in media.

There is a candlelight vigil being held at Campbell High School, where Mr. Nhekairo would have graduated from, as this moment. We will update this story if/when we learn more. Our thoughts are with the Nhekairo family.