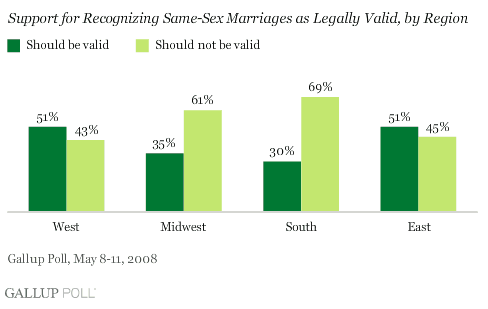 The state of California finally has absolution and peace on the issue of homosexuals and marriage. The Ninth Circuit Court of Appeals ruled yesterday, in the case of Perry vs. Brown (see PDF here), that California’s Proposition 8 is unconstitutional because it violates the equal protection of law clause of the Fourteenth Amendment.

Justice Steven Reinhardt, a President Jimmy Carter appointee in 1980, made sure to cite U.S. Supreme Court Justice Anthony Kennedy’s majority opinion in Romer v. Evans, 517 U.S. 620, 633 (1996) several times throughout his Perry opinion. The Supreme Court ruled in Romer that the constitution does not allow for “laws of this sort,” referring to Colorado’s “Amendment 2,” which outlawed any and all state protections of homosexuals.

Reinhardt, whose opinions frequently are overturned by this “conservative” Supreme Court, knows that it must be Kennedy who is the all-important 5th vote in what would inevitably be a 5-4 decision if the Supreme Court grants certiorari. It appears Reinhardt is trying to equate homosexual marriage with Colorado’s former Amendment 2, which prohibited the state from enacting laws which protected homosexuals from discrimination in housing, employment, public accommodations, etc. In other words, homosexuals had no legal right to sue for damages if a landlord, employer, etc. denied them based solely on being homosexual. Romer, in a 6-3 decision, voided the law, obviously because it violated equal protection under the Fourteenth Amendment.

Romer, however, did not address the issue of marriage between homosexuals. The Perry decision stays very specific in its reasoning, careful not to wade in federal waters and only arguing against the State of California’s voter-approved Prop 8. It would be a victory for Prop 8 opponents if the Supreme Court chooses not to review the decision. It is easily predictable how the other eight justices will rule on the case, (sadly) based on their political backgrounds. Freedom of religion would likely be brought into a broader Supreme Court argument. Justice Kennedy ruled, in City of Boerne (TX) vs. Flores (1997), that the federal government could not compel the states to enforce certain provisions of the Religious Freedoms Restoration Act (RFRA) of 1993. And even if Kennedy affirms Perry, it would likely only pertain to California and not even necessarily other Ninth Circuit states.

Regardless, a federal appeals court has now spoken, saying that homosexuals can marry in California. And the Supreme Court has ruled that states cannot discriminate against homosexuals in hiring, housing, public accommodations, etc. Anybody can choose who they do and what they do in a free society, which is common sense. Now all that must happen to free homosexuals completely is the abolition of the “we are born gay” propaganda campaign by Hollywood, media and public schools.

The American Psychological Association (APA) revised its stance on homosexuality in May of 2009, though this fact was not widely distributed. In 1998, the APA’s statement on homosexuality was: “There is considerable recent evidence to suggest that biology, including genetic or inborn hormonal factors, play a significant role in a person’s sexuality.” The current and official stance of the APA, updated in 2009, reads as follows:

“There is no consensus among scientists about the exact reasons that an individual develops a heterosexual, bisexual, gay, or lesbian orientation. Although much research has examined the possible genetic, hormonal, developmental, social, and cultural influences on sexual orientation, no findings have emerged that permit scientists to conclude that sexual orientation is determined by any particular factor or factors. Many think that nature and nurture both play complex roles; most people experience little or no sense of choice about their sexual orientation.”

The “gay gene” propaganda is similar in so many ways to the myths this government and media are pushing about 9/11. If you choose to be a free-thinker and question the ridiculous “government official story” on 9/11, you are a “conspiracy theorist,” “unpatriotic,” etc. Similarly, when simple facts such as above are stated about homosexuality, the messenger is generally referred to as “homophobic.” The self-anointed spokespeople for homosexuals even chastised former Sex And The City and self-proclaimed “bi-sexual” star Cynthia Nixon last month, when she said “being gay is a choice,” which is contrary to the propaganda they’re pushing.

The continual forcing into the American public’s mind that homosexuals are born that way has done the unthinkable…in being more comical than “19 Muslims with box cutters brought down three buildings in New York on 9/11/2001.” It’s gotten so incredibly juvenile to the point that CNN suspended commentator Roland Martin for this message he posted on Twitter during the Super Bowl. CNN called it “homophobic” and said Martin advocated “beating men” who were attracted to soccer player David Beckham.

The reasons for media and government forcing the “gay gene” myth are debatable, but the insulting of people’s intelligence is not. “Gay community” activists can and will continue searching for something that simply is not there, while having no credible rebuttal or study to the facts presented by science and social construction.

The Ninth Circuit and the U.S. Supreme Court have now ruled that homosexuals enjoy ALL the same rights everyone else has, including freedom of religion. The propaganda is no longer necessary, and only hurts the entire gay community. A lie is only as believable as the person telling it…and we’re talking about U.S. media and government.